A new picture of a Jupiter-like world swaddled in gas and dust is a direct image of what may be the youngest planet yet seen, astronomers report.

The newborn gas giant, dubbed LkCa 15b, orbits a sunlike star 450 light-years away in the northern constellation Taurus.

The planet orbits inside a disk of material around the star that’s no more than two million years old. By contrast, astronomers estimate our solar system is 4.6 billion years old.

The big baby planet may be up to six times the mass of Jupiter, according to theory-based calculations, and it appears to orbit 11 times farther from its parent star than Earth does from our sun.

The new picture was made in near-infrared light, but “the planet would probably appear a deep red to our eye, since it’s still glowing from the heat of being formed,” said Adam Kraus, lead study author and an astronomer at the University of Hawaii.

Kraus and colleagues zeroed in on the young star based on previous observations that showed a conspicuous gap in the star’s surrounding debris disk.

Such gaps are thought to be telltale signs that massive, newly formed planets are circling inside the disks—a protoplanet’s gravity would clear away a wide swath of gas and dust as it accumulates matter. 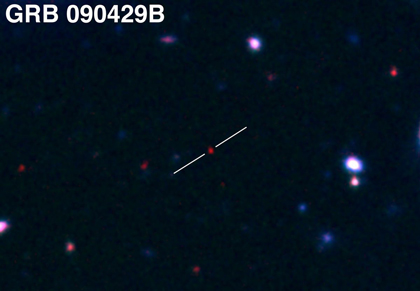 The most distant objects in the universe are also the oldest — or at least that is how they appear to us, because their light has had to travel for billions of years to get here. They are also extraordinarily faint since they are so far away, and only in the last decade have astronomers been able to stretch their vision using the newest telescopes and clever techniques.

One such innovation occurred with the launch of the NASA Swift satellite in 2004; it searches for bursts of gamma-ray emission, called GRBs. These flashes, thought to result from the especially spectacular deaths of massive stars, are the brightest events in the cosmos during their brief (only seconds-long) existence. But because they are so bright, they can be seen even when they are very, very far away.

A large international team of astronomers including CfA astronomers Edo Berger, Alicia Soderberg, and Ryan Foley used the Swift satellite to spot a GRB that rapid, ground-based followup studies determined was possibly the most distant object known (but measurement uncertainties allow a few other candidates to compete for this title). The light from this object has been traveling towards us for about 13.2 billion years, or 96% of the age of the universe. Since the universe is not static but expanding, today this object is much farther away than 13.2 billion light-years – more like about thirty billion light-years.

The scientists were unable to detect any faint trace of the putative galaxy in which this massive star once lived, helping to confirm the great distance of this GRB. Other important details in their new paper confirm that the object is similar to more nearby GRBs, and consequently that – even at this early stage of cosmic life – at least some stars already resembled stars in our local universe.

In a fresh blow to NASA’s post-shuttle aspirations, key US lawmakers voted Thursday to kill off funding for the successor to the vastly successful space-gazing Hubble telescope.

The US House of Representatives Appropriations Subcommittee on Commerce, Justice, and Science approved by voice vote a yearly spending bill that includes no money for the James Webb Space Telescope (JWST).

But the relatively mild dissents in the committee, which said in a terse statement this week that the project “is billions of dollars over budget and plagued by poor management,” suggests the JWST faces an uphill fight to survive.

The vote struck a blow at the National Aeronautics and Space Administration’s goals with the space shuttle program about to end after 30 years, and Obama’s decision to axe a new plan to return astronauts to the moon.

NASA plans to lay out a budget that “will allow us to launch the Webb telescope in this decade,” deputy administrator Lori Garver told reporters at the Kennedy Space Center in Florida.

“We will be working with Congress to assure them we can manage this program and develop the most amazing space telescope,” she said, calling the JWST “a perfect example of reviewing the unknown and reaching for new heights.”

Initial estimates put the cost of the telescope, designed to help the hunt for knowledge about early galaxies in the universe, at $1.6 billion, but now the total price tag has ballooned to $6.5 billion, he said.

NASA has repeatedly pushed back the telescope’s launch date, now set for 2018 at the earliest.

Bringing together two inspirational investigators of our hidden past and uncertain future, this unique dialogue between David Wilcock and Graham Hancock takes us on a roller-coaster ride through the wonders of ancient civilizations and into the mysterious nature of reality itself. 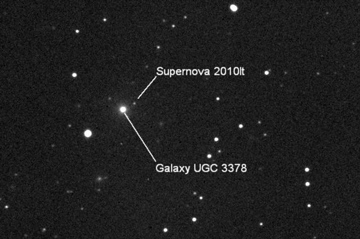 A ten-year old girl from Canada has discovered a supernova, making her the youngest person ever to find a stellar explosion. The Royal Astronomical Society of Canada announced the discovery by Kathryn Aurora Gray of Fredericton, New Brunswick, (wonderful middle name!) who was assisted by astronomers Paul Gray and David Lane. Supernova 2010lt is a magnitude 17 supernova in galaxy UGC 3378 in the constellation of Camelopardalis, as reported on IAU Electronic Telegram 2618. The galaxy was imaged on New Year’s Eve 2010, and the supernova was discovered on January 2, 2011 by Kathryn and her father Paul.

The observations were made from Abbey Ridge Observatory, and this is the third seen from this observatory. It was Lane’s fourth supernova discovery, Mr. Gray’s seventh, and Kathryn’s first.

Since a supernova can outshine millions of ordinary stars, it can be easy to spot with a modest telescope, even in a distant galaxy like UGC 3378 which is about 240 million light-years away. The trick is to check previous images of the same location to see if there are any changes. That’s what Kathryn was doing for the images of the galaxy taken by her father.

It wasn’t Omar’s poetry that made him important: It was the Poetry of His Life. (From the Movie “The Keeper: The Legend of Omar Khayyam)

The Orion Mystery presents startling facts about a star-correlation with the Giza Pyramids in Egypt. Why did the Egyptians align their monuments with such high precision? Why did the ancients put so much emphasis on astronomical alignments?